Secure your place at the Gaelic Drama Summer School

There’s only a fortnight left to apply for a place at Fèisean nan Gàidheal’s Gaelic Drama Summer School 2016.

The Gaelic Drama Summer School is residential and will be held in Portree at the beginning of the school summer holidays between Monday 4th July and Friday 16th July 2016. Participants will receive tuition in a wide variety of drama skills and have lots of fun in the process.

Although the School is aimed at Gaelic speakers aged between 14 and 18, applications from teenagers aged 13 at the time of the School but soon to be 14 will also be accepted.  No previous drama or acting experience is necessary to apply.  Applications should be received by Monday the 20th of June.

Fèisean nan Gàidheal is delighted that David Walker is to feature in the team of tutors as the School’s director.  David is regularly seen on stage and on screen in BBC ALBA’s Bannan. Joining David is actor and drama worker Artair Donald, who recently acted in the Gaelic play Shrapnel, and Dougie Beck who has many years’ experience as a writer and actor in Gaelic theatre-in-education productions for Fèisean nan Gàidheal.   During the first week participants will also receive creative writing workshops from the writer and actor Catriona Lexy Campbell who wrote Doras Dùinte and Shrapnel and has also written scripts for the Gaelic drama Bannan.

In addition to producing a play, participants also get the opportunity to develop and produce a short Gaelic film for FilmG, MG ALBA’s Gaelic short film competition.

The participants’ skills will be showcased at the end of the Summer School during two public performances.  The first will be held at the Fingal Centre in Portree on Thursday the 14th July and the second in Kilmuir Hall on Friday the 15th of July.

Fèisean nan Gàidheal are delighted to offer this 12-day residential event at the all-inclusive fee of £150.  This includes accommodation and meals in addition to the timetabled tuition and activities.  In previous years these have included cèilidh dances with Fèis Alba, circus skills workshops and a show from Let’s Circus, paintballing and outdoor activities.   We are committed to ensuring access for as many young people as possible. If cost is an issue, parents or guardians can contact Fèisean nan Gàidheal’s Drama Officer, Angus Macleod, to discuss possible solutions.

More information and a link to the SSD2016 online application form can be found on Fèisean nan Gàidheal’s website at www.feisean.org/ssd

If you have any questions about the Gaelic Drama Summer School, please contact Fèisean nan Gàidheal’s Drama Officer, Angus Macleod, by e-mailing angus@feisean.org or phoning 01463 225 559.

An Sgoil Shamhraidh Dhràma is funded by Bòrd na Gàidhlig, Highlands and Islands Enterprise, Creative Scotland and the Highland Council. 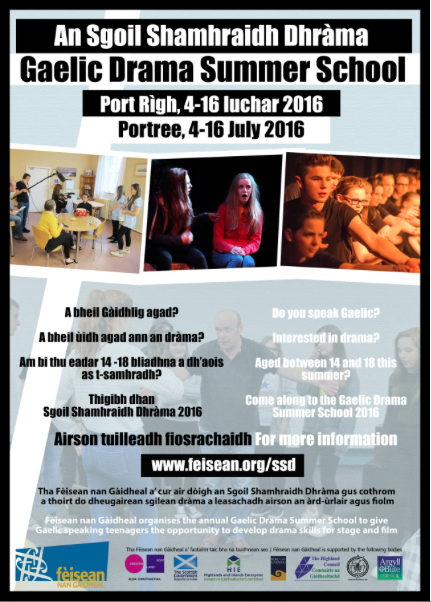