A national tour of Hansel agus Gretel agus Fèill Mhòr na Fuine (Hansel and Gretel and the Great Baking Festival) began this week at the Gaelic medium department at Gilcomstoun Primary, Aberdeen. This is the ninth successive year that Fèisean nan Gàidheal has produced and toured a Gaelic language pantomime for children in Gaelic-medium education.

The 10-day tour will run from November 28th to December 9th taking the play to young Gaelic speakers in cities, towns and villages throughout the country.  This year schools in Lewis and Harris will also have an opportunity to see the play with three performances at Stornoway Town Hall on Monday 5th December and a visit to Sgoil Sir E. Scott, Tarbert, on the morning of Tuesday 6th December. During the tour, pupils from over 40 schools are expected to see the play and on the evening of Thursday 8th December, a public performance will take place at the Ironworks in Inverness with doors opening at 7pm.

The pantomime was written and directed by Fèisean nan Gàidheal’s Drama Officer Angus Macleod, with props and set design by Shannon White and costume design by Laura Cowie.  Angus Macleod said; “The play takes the traditional fairy tale and gives it a fun, original twist with references to the popular Great British Bake Off. The characters provide a lot of fun and silliness which children will find appealing and numerous other elements including song, puppetry and music. It’s also a great opportunity for children to experience Gaelic drama and interact with the actors. I was delighted to secure such a talented cast of Gaelic speakers with a wide range of acting experience.”

Hansel is played by Calum MacDonald, who has recently finished a tour of The Cheviot, The Stag and the Black, Black Oil with Dundee Rep. MJ Deans (Gretel) toured Uisge Beatha Gu Leòr/ Whisky Galore produced by the National Theatre of Scotland and Robhanis and this year acted in Fèisean nan Gàidheal’s early years theatre project Hùb Hàb air Ghleus. Debbie Mackay (An Gille-bonnaich) is best known for her role as Màiri in BBC Alba’s Bannan and Iain Beggs, who plays the part of Màiri Nic na Dearcaige, is also well-known for his role in Bannan as Anndra and recently played the lead role in the play Shrapnel by Theatre Gu Leòr.

The Gaelic pantomime is delivered through Fèisean nan Gàidheal’s Fèisgoil service. The production and tour is made possible thanks to funding received from Bòrd na Gàidhlig.  For more information about the tour contact Fèisgoil Manager Eilidh Mackenzie or Drama Officer Angus Macleod on 01463 225559. 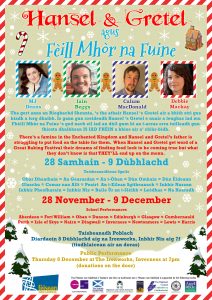