A new play commemorating the tragic events of the Iolaire disaster 100 years ago will be performed this week by participants of this year’s Sgoil Shamhraidh Dràma (Gaelic Drama Summer School).  ‘Call na h-Iolaire’ (The Loss of the Iolaire) will be performed on Thursday the 12thof July at 7.30pm at Plockton High School hall as part of Fèis Alba’s Family Cèilidh.   The final performance will take place on Friday 13thJuly at Kilmuir Hall at 7.30pm.  The evening in Kilmuir will also feature performances from Clann Thròndairnis, Skye Highland Dancers and a ceilidh dance from Ceilear, the Skye and Lochalsh Ceilidh Trail group.

The School’s director is Mairi Morrison. Mairi, originally from Lewis, lives in Glasgow, and is well known as an actor and singer.  She said: “Over 200 lives were lost in the Iolaire disaster which took place 100 years ago this Hogmanay.  It’s important that young people from the islands and throughout Scotland remember the lives that were lost and its impact on the people of Lewis and Harris.”

Fèisean nan Gàidheal’s Drama Officer Angus Macleod, who co-ordinates the Sgoil Shamhraidh Dràma project, commented: “The play was devised and scripted and rehearsed at the School which started on the 2ndof July. ‘Call na h-Iolaire’ will showcase many of the drama skills participants have gained during the first week of workshops which include mime,  character development, improvisation, mask work, storytelling, voice work, Gaelic song, dance and movement.”

Participants also produced a short film for FilmG, MG Alba’s Gaelic short film competition which this year is based on the theme of ‘Ann am Priobadh na Sùla’ (In the Blink of an Eye).  Filming took place on the Saturday with expert assistance from cameraman Alistair Mackay.  The film will be edited by the participants this week.

SSD2019 Dates
The Gaelic Drama Summer School will return to Portree next year and will take place between the 1st and 13th of July 2019.   More information about the School is available on the Fèisean nan Gàidheal website at www.feisean.org/ssd 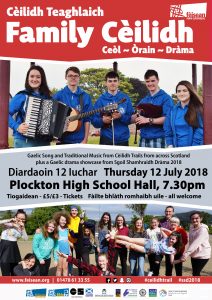 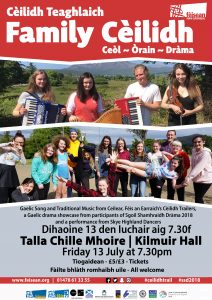