A new play focusing on  attitudes to littering will be performed this week by participants of this year’s Sgoil Shamhraidh Dràma (Gaelic Drama Summer School).  Abair Sgudal!, directed by Mairi Morrison, will be performed on Friday the 19thof July at 7.30pm at Kilmuir Hall and feature as part of a Family Cèilidh.  The evening in Kilmuir will also feature a ceilidh dance with the Malcolm Munro ceilidh band.

Fèisean nan Gàidheal’s Drama Officer Angus Macleod, who co-ordinates the Sgoil Shamhraidh Dràma project, commented: “The play was devised and scripted and rehearsed at the School which started on the 8th of July. ‘Abair Sgudal’ will showcase many of the drama skills participants have gained during the first week of workshops which include mime,  character development, improvisation, storytelling, Gaelic rap, body percussion, dance and movement.”

Participants also produced a short film for FilmG, MG Alba’s Gaelic short film competition which this year is based on the theme of ‘Treòraich’ (To Guide/ Lead).  Filming took place on the Saturday with expert assistance from cameraman Alistair Mackay.  The film will be edited by the participants this week.

SSD2020 Dates
For more information about the School and next year’s dates visit the Fèisean nan Gàidheal website at www.feisean.org/ssd 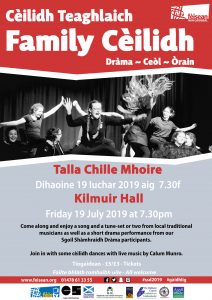