Fiodhògaidhio agus an Fharpais-chiùil, tells of Arturo and his struggling musical instruments’ shop which he fears he might have to give up. His latest musical invention, Fiodhògaidhio, has given him hope for a brighter future, but his dream for his creation soon turns his whole world upside down!

Due to the Covid-19 pandemic, the 2021 production was filmed and made available to Gaelic medium primary schools and secondary schools with Gaelic departments on the 9th of December.  The film was streamed online at Fèisean nan Gàidheal’s Facebook page on Thursday 16th December.

Due to the Covid-19 pandemic, the 2020 production was filmed and made available to Gaelic medium schools throughout the country online.  The film was streamed to the public at Fèisean nan Gàidheal’s Facebook page on Thursday 17th December and it can still be viewed here.

Seocan and his granny don’t have any money to spare for Christmas but their fortune is set to change when Seocan finds a dusty old accordion in the attic.

Tales of a hungry wolf in the enchanted forest are a distant memory and Little Anna has no reason to worry when she decides to visits her great granny for her birthday…or does she?

The national tour of the Gaelic pantomime  Hansel & Gretel agus Fèill Mhòr na Fuine (Hansel and Gretel and the Great Baking Festival) had it’s final performances on Friday 9th December 2016 with performances in Dingwall and Tain.   The 10-day tour gave over 2000 children with Gaelic from 45 schools the opportunity to the see the play. In 2016 Gaelic schools in Lewis and Harris had the opportunity to see it  with three performances held at Stornoway Town Hall on Monday 5th December and a performance in Harris, at Sir E. Scott school on the morning of Tuesday 6th December.  The tour also included a public performance held at the Ironworks, Inverness on Thursday 8th December.

Photos from a perfomance at Dingwall Academy on Thursday 9th December with pupils from Dingwall Primary, Millbank Primary, Nairn and Ullapool Primary in attendance. 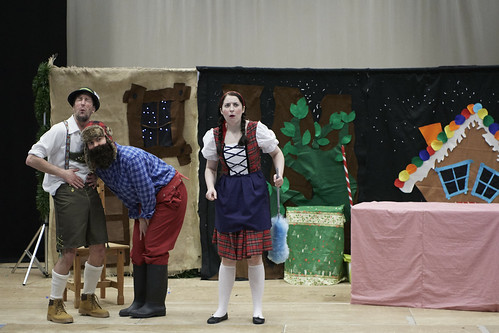 Over the first two weeks of December 2015 Marsaili agus a’ Bhleideag Airgid (Marsaili and the Silver Snowflake) travelled over 1,200 miles, visiting cities, towns and villages throughout the country.

The hour long show was staged in 17 different schools/venues with a further 26 schools being invited to attend neighbouring schools to enjoy the show together. The cast of 4 – Ellen Macdonald, Catriona Nicolson, Iain Beggs and Angus Macleod – are well experienced actors and singers, some enjoying celebrity through the current Gaelic soap opera, Bannan. The play was written by Fèisean nan Gàidheal staff and was directed by David Walker Costume design was by Laura Cowie.

I develop and extend my literacy skills when:

“The children all LOVED the pantomime, it was a great success.”

“The children thoroughly enjoyed the panto this morning –it was very funny and the language was pitched at an appropriate level for all. The actors were great too!”

“Everyone thoroughly enjoyed the experience and the pupils all enthused about the performance. Feedback from both pupils and staff was that it was really good and we welcome having any Gaelic experience for our children in the North East of Scotland. Seeing the language used in action helps to develop pupils understanding and daily usage as a living language.”