Taste the best of Highland culture at Blas 2016 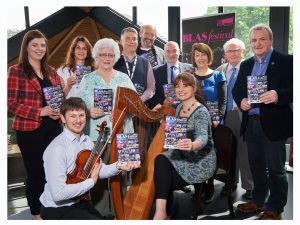 The opportunity for communities to celebrate Highland culture has been a hallmark of the Blas Festival since it began and this year’s festival, taking place from 2 to 10 September, will be no exception.

The festival lineup was launched at an event in Eden Court, Inverness, on 29 June where organisers Fèisean nan Gàidheal, who operate the festival in a partnership with The Highland Council, outlined a programme with a generous helping of cèilidhs, concerts, school visits, music in hospitals, performances in care homes, drama performances, family events, walks and talks.

Blas will celebrate the 80th birthday of Uist cultural icon, Rona Lightfoot, and the contribution to Gaelic music of Skye’s Jonathan MacDonald. New work will feature in the shape of Beul na h-Oidhche gu Camhanaich (Mouth of the Night to First Light) from Highland-based Gaelic singer and harp player, Mary Ann Kennedy, which is the 11th new piece commissioned in the relatively short history of the Blas Festival.

Young people from the Highlands will feature widely including a Highland performance of Graham Mackenzie’s Crossing Borders, Fèis Cèilidh Trail groups, Guth nan Gael – A Gaelic and Gaeilge exchange project, pupils from the Centre of Excellence in Traditional Music at Plockton High School and the singers from an innovative Fèisean nan Gàidheal project, Fuaran.

They will appear alongside some of the best international artistes including Sharon Shannon, making her first appearance at Blas, the Red Hot Chilli Pipers, Nuallan from Cape Breton as well as perennial favourites Aly Bain & Phil Cunningham who are celebrating 30 years playing together. There will be appearances from newer outfits, Tide Lines, Tannara and Kilda, as well as a staple of the finest Gaelic singers including Margaret Stewart, Darren Maclean, Kristine Kennedy, James Graham, Paul McCallum, Linda Macleod, Rachel Walker, Ruairidh Cormack, Anne Martin, Ellen MacDonald, Ceitlin Smith, Robert Robertson and Eilidh Cormack. Gaelic writers and poets will also feature in the continuation of a partnership with Comhairle nan Leabhraichean, the Gaelic Books Council.

Donna Macrae, Director of Firefly Productions, the company contracted by Fèisean nan Gàidheal to organise the festival said: “We have built a programme that we think is very strong and we are looking forward, once again, to taking great music to smaller communities, as well as bringing entertainment to school, hospitals and care homes.”

Fiona Hyslop, Cabinet Secretary for Culture, Tourism and External Affairs, said: “Blas has been a highlight in the festival calendar for people across the Highlands since it was established in 2004. This year’s programme offers a diverse selection of outstanding cèilidhs, concerts, and drama performances for people of all ages. Blas is a unique festival which enriches our cultural life and promotes Gaelic use and awareness.”

The Chair of The Highland Council’s Gaelic Implementation Group, Councillor Hamish Fraser said: “The Blas Festival is achieving a great deal especially in relation to showcasing traditional music and Gaelic song to audiences in a wide variety of venues within communities across the Highlands and Argyll, from Farr to Fort William and Kilmuir to Kinlochleven and Sleat to Strathy”. He continued, “The Council has, and continues to support traditional music and Gaelic song by supporting a number initiatives and organisations who are based in the Highlands, such as Fèisean nan Gàidheal the umbrella body which manages and supports the local Fèisean across the Highlands, Fèis Rois which this year is celebrating its 30th anniversary, the Provincial Mòds and the Royal National Mòd. The Council has reduced and diminishing resources which currently makes service delivery very challenging. However, I want to take this opportunity to wish Blas 2016 every success and encourage people to attend the concerts and events to experience quality musicianship and enjoy the best of Gaelic and Traditional music and culture which the country has to offer.”

Ian Smith, Head of Music, Creative Scotland, said: “The iconic Blas festival is one of Scotland’s finest examples in promoting our indigenous cultures across the Highlands and Islands of Scotland, but with a global reach through its partnership with Celtic Colours in Cape Breton; Nova Scotia-a link that is again very evident in this year’s edition. New work from Mary Ann Kennedy and great performances celebrating great Gaelic singers alongside the Red Hot supergroup, the Chilli Pipers with the incredible duo that is known to all simply as Phil and Aly ensures that this is again a festival for every taste and one that Creative Scotland is delighted to support.”

Bòrd na Gàidhlig Ceannard (CEO), Shona MacLennan said: “The Blas Festival has become a highlight on the Highland’s social calendar.   Bòrd na Gàidhlig are committed to supporting traditional and contemporary Gaelic arts & culture. The Bòrd recognises that many people are attracted to learn and use the language by accessing and partaking in various Gaelic art forms including music, song, dance, drama & literature.

Joanna Peteranna, Senior Development Manager at HIE, based in Benbecula, said: “HIE’s support for arts and culture complements our work to develop the creative industries growth sector. As well as supporting and promoting talent and creativity, the Blas festival attracts newcomers and returners to the Highlands and Islands. It allows young and aspiring musicians the opportunity to tour and perform at local venues across the region and we are delighted to support it.”

The full festival programme is now available at www.blas-festival.com where full details of all events and how to buy tickets can be found.