Suitable for young children of nursery and lower primary age, the two characters in the play, Hùb and Hàb, introduce the children to shapes using Gaelic song, music and a friendly pirate called Seonaidh. The play is accessible to pupils learning Gaelic and the tour includes performances for several mainstream P1-P3 school groups and nurseries.

The last three days of the tour will continue this week in Lewis with three performances at the Bayhead Bridge Centre, Stornoway on Tuesday 23rd May, Sgoil nan Loch and Sgoil a’ Bhac on Wednesday 24th May and Tong School and Sgoil an Rubha on the morning of Thursday 25th May.  The tour has been made possible thanks to funding from Comhairle nan Eilean Siar and Bòrd na Gàidhlig. 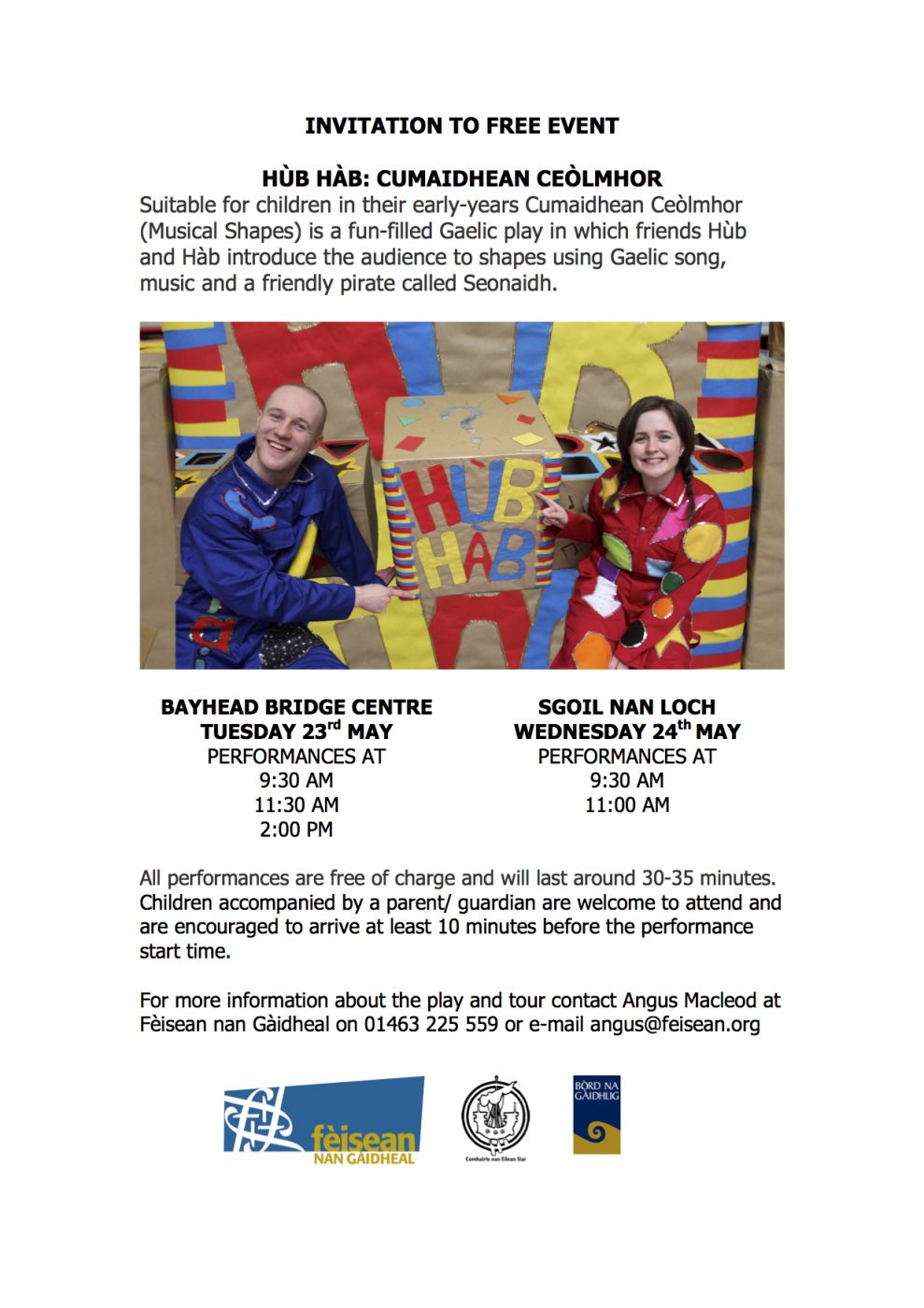 The play features Gaelic-speaking actors Ellen MacDonald (Hùb) and Murray Willis (Hàb). Ellen is well known as an award-winning Gaelic singer and performs with Gaelic super group Dàimh. Hailing from Lismore, Murray is a talented accordion player and tutor and was a Finalist in 2016’s BBC Young Traditional Musician of the Year. The play showcases the musical talents of both performers.

It was written and directed by Fèisean nan Gàidheal’s Drama Officer, Angus Macleod, with musical direction from Eilidh Mackenzie, Fèisgoil Manager. Together they developed original songs and music for the play. The set and props were produced by Shannon White and the costumes by Laura Cowie.

Anna Murray, newly appointed Comhairle nan Eilean Siar Gaelic Arts officer; “We are delighted to work with Fèisean nan Gaidheal’s Fèisgoil and bring their highly acclaimed and energetic Early Years Gaelic Drama show Hùb Hàb to tour the Outer Hebrides. This is an exciting opportunity for young children to engage with Gaelic through drama and Gaelic song. Ellen Macdonald and Murray Willis are award winning musicians who bring sparkle to the show and are sure to delight.”

Eilidh Mackenzie, Fèisean nan Gàidheal’s Fèisgoil Manager; “Hùb-Hàb, our early-years theatre project enjoyed a successful tour in the Central Belt and Argyll and Bute earlier in the year and we are absolutely delighted to be given the opportunity to bring the Cumaidhean Ceòlmhor show to the Western Isles.  The performance,  has been entertaining children in schools and community early-years groups with its high energy, reinforcement of age-specific language for both Gaelic speakers and learners of the language. The show will have travelled from the Butt to Barra over the seven day tour and we are delighted to bring live Gaelic theatre performance to young children throughout the islands.”