This year’s Gaelic Drama Summer School will take place in Portree, Isle of Skye, between Monday 8th and Saturday the 20th of July. Gaelic-speaking teenagers aged between 13 and 17 at the time of the School are welcome to apply before the Friday 21st June deadline.  The online application form can be found along with more information at www.feisean.org/ssd. No previous drama or acting experience is necessary to participate.

Angus Macleod, Fèisean nan Gàidheal’s Drama Officer and organiser of the residential school, said  “Applicants have the option to sign up for the first 6 or the full 12 days.  During the 6 day option all participants  are introduced to a variety of acting and performance skills-based workshops and on the Saturday have an opportunity to produce a short film for FilmG, MG Alba’s short film competition.  The 12 day option gives participants the opportunity to further develop and then showcase the work they have produced on the final night.   The School provides a springboard for teenagers interested in developing acting skills for both stage and screen, and a fantastic opportunity to gain confidence in their spoken Gaelic.”

Fèisean nan Gàidheal is delighted that Mairi Morrison will be returning as artistic director for the second year.  Mairi, originally from Lewis, lives in Glasgow, and is well known as an actor and singer.   Late last year she wrote and performed in the Gaelic drama ‘Bana-ghaisgich/ Heroines’ produced by Theatre Gu Leòr which featured as part of the Iolaire Centenary Commemorations.  Mairi is also known for her role in BBC Alba’s ‘Bannan’.

Financial support covering up to 50% of the School fee is available to eligible participants thanks to funding from the Simon Mackenzie Trust, which is administered by Fèisean nan Gàidheal.  The trust was established in 2008 in memory of the celebrated Gaelic actor Simon Mackenzie to foster the artistic talents of young Gaels.

If you have any questions about the Gaelic Drama Summer School please contact Fèisean nan Gàidheal’s Drama Officer Angus Macleod by e-mail on angus@feisean.org or phone 01463 225 559. 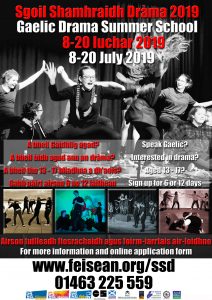